Perhaps the simplest way to determine the difference between mezcal and tequila, is to taste it. The contrast is never starker than when the spirit is slipping down your throat. Tequila is sweet, slightly vegetal at times, honeyed and spicy. Mezcal delivers similarities, but ultimately, you’ll note a distinct smoky aroma and flavour.

The reasons for the differences are more complex than the simple taste test, but at the heart of both stories is the agave, the ingredient at the very heart of both spirits.

Mezcal operates as an umbrella term for agave distillates, so Tequila is a mezcal in the same way Cognac is a brandy. In the 16th century the Spanish christened all agave creations ‘Mezcal Wine’ and over the ensuing centuries the Jalisco region started to perfect blue agave cultivation – as a result tequila formed its own identity and took centre stage.

Today tequila is carefully regulated, and we recommend 100% agave spirit, but to earn this labelling, tequila must be made using the tequilana weber blue variety and grown and harvested within specific territories. Regions of production include the five Mexican states of Nayarit, Michoacán, Guanajuato, Tamaulipas and, predominantly, Jalisco where the impact of terroir on agaves cultivated in highland or lowland regions can play a part on style of spirit.

Unlike tequila, Mezcal is not limited to the blue agave, and can be derived from many different agave species, up to around 30 in fact. It has an appellation of origin like tequila, and production is geographically spread, but there is definite heartland for Mezcal in Oaxaca and they tend to favour a particular agave, the Espadin. 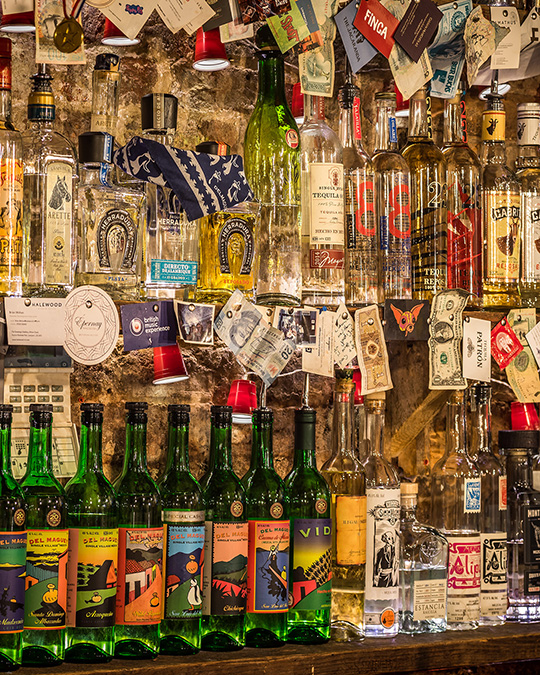 “WHATEVER YOUR DRINKING, OUR MESSAGE, OUR MANTRA IS; DRINK LESS, BUT DRINK BETTER” – THINKING DRINKERS

In the case of tequila, the agave is cooked in ovens, or hornos, some brick, some steel. With mezcal though, the agaves are baked in earth pits. These holes are lined with volcanic rock and agaves are placed in on a dampened wood burning fire, then covered with earth. They are commonly crushed by a horse-drawn tahona stone, then fermented with wild yeasts and distilled on small pot stills. It’s an artisan process and it’s this that delivers the distinctive smoke note.

Mezcal is not unique in its artisan approach, you will find similar commitment to traditions in the best tequila. And it is this approach that makes agave spirits fascinating and full of narrative to pass on to customers – even those who still claim they don’t like it!

Celebrate National Tequila Day on 24th July, by encouraging your customers to see if they can tell the difference between a Mezcal like Quiquiriqui Matatlan vs. premium tequila – we’d recommend 1800, Cazcabel, Don Julio, El Jimador or Ocho.  Visit DistilledUK.com for details on the full range available.