Number 8 is a symbol of balance, harmony, power and luck, but more recently it seems, also a worthy symbol for agave spirits in the form of Tequila Ocho.

Ocho is a true bartender brand, an assertion recently reinforced for us when we visited the La Alteña distillery in Mexico with the multi-award-winning Jake Burger and Tony Conigliaro – two of the most important bartenders of the last two decades.  There are countless reasons for their interest in the brand, including the methods of production, the creators behind it and indeed, the fact that it’s a tasty tequila. But perhaps one of the best reasons for all bartenders is its story of terroir.

Ocho is produced at La Alteña, a distillery run by the famous Carlos Camerena. For the uninitiated, Carlos is a noted agave apostle, whose approach to distilling blends the artisanal values of his forebears with a peerless breadth of modern knowledge. One of the few to ferment with wild yeast, still baking agave in brick steam hornos, he is a traditionalist, but a perfectionist with it. The hype behind the hero is entirely justified, and to witness the process at La Alteña is to understand the history of the spirit.

To add to Ocho’s gravitas, it was co-created by Tomas Estes, a tequila ambassador for the Mexican government and owner of London’s church of tequila, Café Pacifico. Tomas is himself a legend of agave spirits and has been one of the most vital voices in tequila education during the last 30 years.

Such names should inspire any drinks professional to pick up a bottle, their passion is the reason we all devote ourselves to discerning distillates. And as we say, it helps that this is an incredibly tasty tequila.

But even more useful to bartenders is this issue of terroir and that Ocho tells a new story for the spirit. It’s a narrative that is easily communicated to the customer and one to guide them away from historic misdemeanours of tequila malpractice –  necking the spirit after 10 pints. 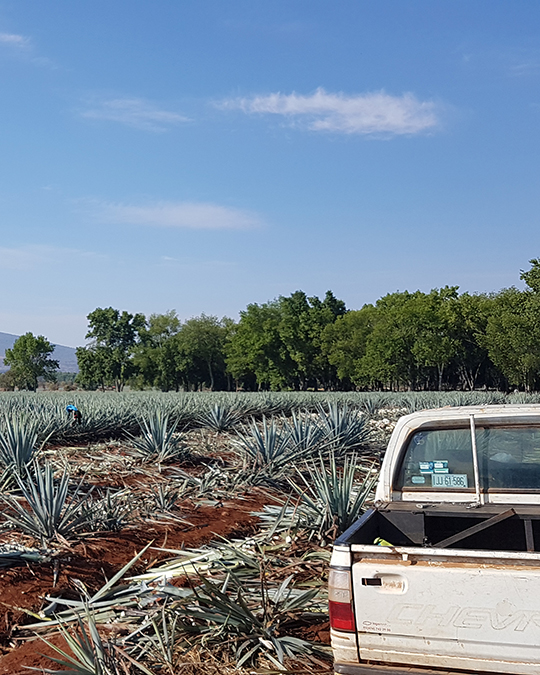 “TEQUILA TERROIR GIVES THE SPIRIT A JUSTIFIED AIR OF QUALITY. IT CAN FASCINATE THE CUSTOMER, AND IT SHOULD FASCINATE ALL BAR PROFESSIONALS.”

Ocho is a single estate tequila, so the agaves are taken from a specific field and harvested at a specific time. As Carlos explains:

“We are the first tequila to list on the bottle the year it was produced and the field where the agaves were sourced. Each batch comes from a different field or rancho contributing distinctive characteristics of that place. The main objective is to show terroir in the tequila because I consider myself an agronomist and I love the agave.”

The agave is cut before it flowers, denying it the chance to reproduce through pollination, the cutting is then used to clone the agave. The reason for interrupting the process is because flowering uses up the agave’s energy, and critically, that energy is the sugar that Carlos needs for his mosto – the sugar juice he needs to ferment.

The agave is a fascinating plant with a remarkable approach to life, shutting down during the day to preserve energy and coming to life at night. Its crassulacean acid metabolism enables it to survive in arid conditions, and is being explored by scientists, who think genetic mapping could be mimicked in other grain crops, making them durable in countries suffering from climate-driven famine.

Meanwhile, in his own efforts to help the sustainability of the agave, Carlos has allowed a percentage of his crop to flower, reintroducing bats into the region to help natural pollination. In this way he can help maintain agave diversity, so the plant doesn’t become susceptible to any diseases carried forward through cloning.

More relevant to tequila though, the soil, sunlight and waterfall all impacts on the sugar yield of each agave, and ultimately the flavour. Which is why Carlos has looked to distilll using agaves from very specific fields, or ‘ranchos’ .

His agave are grown in Arandas, the highland region of Mexico, with rich red volcanic soil and abundant sunshine, but what’s fascinating is how each rancho has variations in soil composition and altitude that can deliver a dramatically different flavour profile.

As well as terroir, other production methods come into play for the flavour. Carlos’s traditional brick steam hornos are not the most efficient method of cooking but ensure he retains much of the flavour. There’s also the story of that wild yeast.

“The yeast comes in from the agave in the field and is all wild,” says Carlos. “We also use open oak fermenters. In the case of Ocho we want deliver a slightly crisper spirit, and so use rollers in place of our tahona stone and stainless steel stills as well as the copper pots.

“Even when it comes to aging we rest our reposado and anejo tequila in used oak that imparts a very subtle wood influence, because we don’t want oak covering the flavours of the terroir. It is in there for eight weeks and 8 days, but you can still taste the profile for the agave.”

And rightly so, because, as tentative tequila consumers need to learn, the agave flavour is floral and sweet, and very easy on the palate.

While visiting Carlos we had the privilege to taste some of his latest products and sampled two blancos, one from the Las Aguilas rancho and one from Las Presas, an agave field with a higher elevation. The difference was remarkable, the former being more earthy and robust, the latter cleaner with citrus and spicy pepper.

To compare them is to understand what the project is all about, indeed it was this process that gave Ocho its name.

“The name comes from the first tasting we had,” says Carlos. “Tomas and I had eight different samples and agreed to taste them and pick our favourite independently. We both chose sample eight, so we decided that had to be the name.”

The entire narrative is critical because one of the main challenges with tequila is changing the perceptions of the customer and many still harbour fears that this is a dangerous drink. As bar professionals, you know better and should be celebrating 100% agave spirits, but conveying this point is often tricky. With a product like Ocho though, you talk about how tequila should be sipped and savoured rather than shot, and then directly showcase the influence of the agave. The story invites the customer to take some time over the experience. And with the introduction of vintages, tequila can even be compared to something like a Bordeaux wine.