Traffic cones can sleep more easily at night because booze Britain is not drinking as much as it used to.

Since 2004, when per capita consumption of alcohol reached its peak at a liver-quivering level of 9.4 litres, alcohol consumption has fallen 18% and more people, especially the more body-conscious, younger generation, are adopting a more mature attitude to drinking. According to the Office of National Statistics (ONS), 21% of people claimed they eschew alcohol entirely with more than a quarter of 16-24 year-olds admitted to not drinking anything at all.

In London, “Mindful Drinking” has even become a thing with the first ever “Mindful Drinking Festival” playing host to an array of low-alcohol producers in the Capital’s uber-trendy area of Bermondsey. Its aim? To encourage a more gentle and genteel approach to elbow-bending. What’s more, in the last 12 months or so, a number of bars and restaurants have begun creating their own non and low-alcoholic drinks such as drinking vinegars, shrubs and kombucha – a fermented drink made from sweetened tea and a specific culture of bacteria and yeasts.

Allied to this, several drinks companies, by no means small in size, have invested in a non-alcoholic spirits category that has polarised opinion within the trade – some believing them to be a fad and others firmly declaring them the ‘future’. Only time will tell.

What cannot be questioned, however, is that bars can ill-afford to ignore this growing number of abstainers – whatever their reasons may be. Not least because, when approached in the right way, the soft drink and non-alcoholic category can seriously bolster one’s  bottom-line.

“Many venues believe that focussing on drinks without alcohol automatically means a drop in revenue, but this does not have to be the case,” said Laura Willoughby, co-founder of Club Soda, a mindful drinking movement aimed at ensuring non-drinkers are comfortable in pubs and bars. “

“We are not suggesting you take anything away from your normal offer but add more in,” she added. “One in seven customers are likely to be not drinking tonight, so how are you going to move them away from the free tap water or the coke (which you can only manage one of in a night) to something they can repeat purchase?

With venues becoming increasingly chameleon in character, transitioning from coffees and pastries in the morning to cocktail and pints in the evening, it is crucial to make sure people have something to drink whatever time of day they come in. 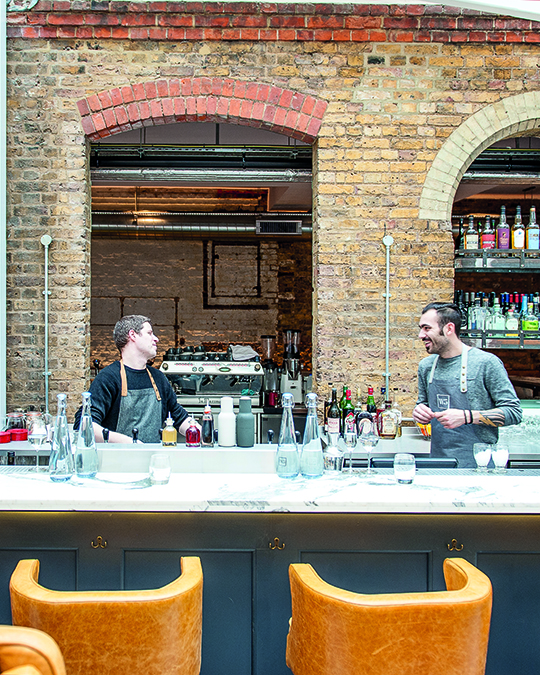 “DO NOT UNDERESTIMATE THE ALCOHOL FREE MARKET…OUR FOOD MENU HAS GOT PLENTY OF VEGAN, VEGETARIAN, GLUTEN FREE AND CALORIE-LIGHT OPTIONS THESE DAYS, AND SO  OUR DRINK MENU HAS THE SAME KIND OF OPTIONS.”

“Do not underestimate the alcohol free market,” said James Daley., manager of the Draft House, a chain of craft-beer centric bars who have also created their own home-made tonics. “As people have become more savvy with what they eat, they also look at what they are drinking. Our food menu has got plenty of vegan, vegetarian, gluten free and calorie-light options these days, and so our drink menu has the same kind of options.”

Drinking, it seems, is being shaped by a mixture of cross-generational and demographic trends. “Younger people are drinking less,” said Laura. “Even if they do have some messy night outs, those are less frequent. They are far more conscious of their health and diet (and not undoing the hard work), the quality of their nights out (vertical drinking in any old pub is just not good value for money), and are more likely to spend cash on fewer ‘really good’ drinks. They don’t want a digital footprint of drunken photos to follow them as they enter the world of work.”

Furthermore, those aged 35 and over are becoming increasingly health conscious with an eye on sugar and alcohol consumption. “People will pay a premium for a craft soda and drink 5 or 6 over the course of a night,” added Laura. “People (should) regard going to the bar for a drink in the evening a viable option whether they are drinking or not – at the moment customers absent themselves if they are not drinking which is a great tragedy.”

Charlotte’s bartenders realised that just because drinkers may not want to drink alcohol, it doesn’t mean they are willing to compromise on flavour, innovation or the overall experience. As such, the menu is a concise yet esoteric offering that incorporates everything from verjuice, a slightly acidic pressing of unripened grapes, to balsamic vinegar, jasmine tea, vanilla and even liquorice root.

Rather than creating ‘mocktails’ – which are merely non-alcoholic versions of alcoholic cocktails – Charlotte’s ‘softs’ are stand-alone creations. The most ambitious being the Naughty Horchata, a contemporary take on an ancestral drink, that involves soaking rare long rice in almond milk before spicing it up with nutmeg, lavender and a touch of honey – to create a drink that is wildly popular throughout Puerto Rico, Central America and central and southern Mexico.

“We wanted to provide a much higher end, more interesting soft drink offering that grabs attention, gives people excitement and diversity rather than just a high calorie, sugar face hit,” said head bartender Peter Zuffa. “We also wanted the drinks to be fun for people who wanted something fresh and healthy.”

Using multiple products from an array of different artisan suppliers, these freshly made, bespoke ‘soft’ drinks may not deliver the same level of gross profit that mainstream soft drinks do, but for a venue that prides itself on being “a celebration of craft and provenance”, syrups from the gun just wouldn’t work.

“We sell a lot of these drinks at lunch and the early evening,” added Peter. “The typical customer to order these cocktails is someone interested in leading a happy, healthy life. People who do a lot of yoga (we have a yoga studio opposite us) pregnant women and children.”

At the Global Drinks Forum, held last Autumn in Berlin, the non-alcoholic category was hailed as the greatest opportunity in the drinks industry, according to Dan Gasper, chief operating officer at Distill Ventures, a spirits accelerator set up in association with Diageo to  provide advice and funding for drinks-driven entrepreneurs.

30% of customers in a venue won’t be drinking alcohol

19% of the UK population don’t drink at all

Four in ten UK adults say they are consuming less alcohol now than they did a year ago, particularly young men