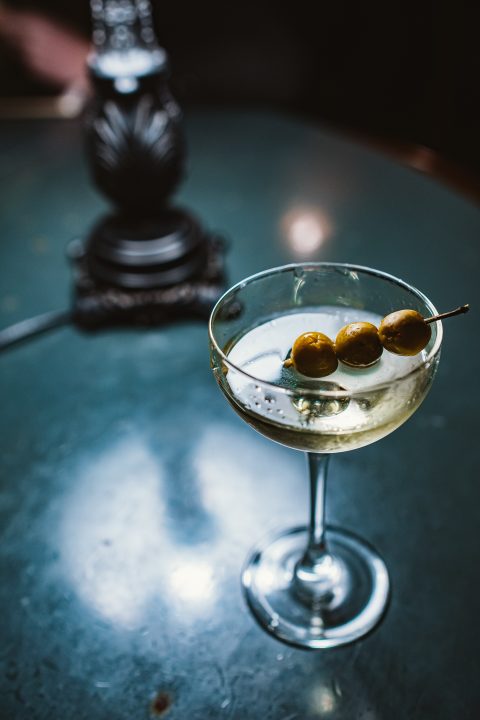 No other drink captures that moment, when the short arm strikes six (or indeed five if you’ve had a really horrible day) more magnificently. Staggeringly simple yet deceptively difficult to master, the Martini is unashamedly brazen in its booziness, transparent in both appearance and intention; clean-lined yet complex, a v-shaped salute to the tribulations, trudge and tyranny of modern life – and rightly considered as the king of the classic cocktails.

Steeped in a colourful history, the memoirs of the Martini are, as ever, the topic of much contention among cocktail historians. Some contend the cocktail’s beginnings date back to the Martinez during the goldrush in the 19th Century while others claim the forefather to the Martini was the Marguerite – first mentioned in 1900.

Over the years, the Martini has become progressively drier and developed into a drink that, today, deftly dovetails with the current ‘gin-aissance’. No other cocktail captures the true character of a gin, or indeed vodka, more concisely than a Martini – gently laying botanicals bare and ruthlessly revealing the spirit’s flavour and, indeed, flaws.

The Martini may have had more twists than a Chubby Checker tribute night but in its most classic configuration, the key is to capture the conversation between the gin and the vermouth while simultaneously striking the right balance between dilution and temperature.

Keep it cold. As cold as possible. The shaker, the gin, the vermouth and the glasses. Everything. Freshness, as ever, is fundamental. As American essayist Bernard DeVoto contests in his book “The Hour: A Cocktail Manifesto” – “You can no more keep a Martini in the refrigerator than you can keep a kiss”. In this current era of ‘mindful drinking’, it is worth noting that DeVoto warns against making Martinis too strong – drinking
one should give you the belief that “at any moment we may see the unicorn. But it would not be a Martini if we should see him”.

Last year, Lloyds of London, one of the oldest and most iconic of British insurance institutions, announced it was forbidding its employees from indulging in the iconic ‘liquid lunch’.

A couple of bottles of clarets with clients? A swift half with Susan from Finance? Not anymore. “Drinking alcohol affects individuals differently,” announced an internal email sent to its 800 staff. “A zero limit is therefore 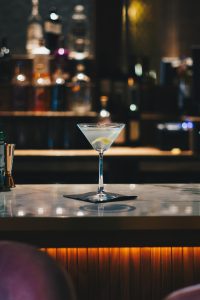 simpler, more consistent and in line with the modern, global and high-performance culture that we want to embrace.”

As news of its outright ban on boozing between nine and five spread, pints were spluttered onto pinstripes throughout the City. How can you do business without booze? After all, alcohol has been oiling the wheels of commerce for more than a century, drink is the driving force behind modern Capitalism and, let’s be honest, no other cocktail has fuelled the freemarket economy more famously and fervently than the Martini.

Back in the 1960s and 70s, the “Three Martini Lunch” was a regular ritual for those working on Wall Street and Madison Avenue in New York. It was an American imbibing institution when business folk would go out for lunch and have a Martini before the meal, a Martini during the meal and a Martini after the meal. Clients would become companions, any devil in the detail of prospective deals would magically disappear, and binding
contracts would be drawn up and signed on bar napkins. And the best thing about it? It was tax deductible.

In the late 1970s, President Gerald Ford said, “The three-Martini lunch is the epitome of American efficiency. Where else can you get an earful, a bellyful and a snootful at the same time?”

Alas, times have changed, and asking the taxpayer to subsidise a liquid lunch is no longer deemed acceptable on either side of the Pond. But of all the ways to reduce the UK’s trillion-pound deficit, breathing life back
into the iconic “Three Martini Lunch” is certainly the most enjoyable – much more fun than austerity (albeit arguably less effective).

Of course, given the sensible sipping times in which we now live, drinking three Martinis over lunch is no longer considered acceptable. But that doesn’t prevent bars bringing it back – why not spread three different Martinis across smaller serves and accompany them with food?

A great way to showcase the versatility of the Martini is by celebrating its kinship with cuisine. Cocktail and food pairing can often be contrived but it can really work when done well.

Even when confined to using the core ingredients in a Martini, the bartender has the tools to tailor it to a specific dish. With a glass of wine, for example, there’s not that same level of freedom to play around with flavours.

By pairing the following Martinis with different dishes, and in less potent quantities, customers can experience the iconic “Three Martini Lunch” yet still be able to walk out of the venue unaided.

To be enjoyed alone without any interference from anything edible, the Classic dry martini is the ultimate aperitif, capable of stimulating salivary glands from a hundred yards and the perfect way to prepare your palate for the food ahead.

Given that customers will most likely have experienced a classic Martini before, why not serve up a softer and sweeter version to start? Swap the dry vermouth for the acutely aromatic and eye-catching Cocchi Vermouth di Torino, a dark violet-hued vermouth more readily associated with Negronis and Manhattans. Rich in autumnal fruit, orange zest and warming spice but with all the bitter appetite-inspiring essentials you’d expect from an aperitif, it works wonderfully in a Martini and contains enough character to simply sip over ice.

This is, apparently, how Franklin D Roosevelt preferred his Martini – made using a special set of silver shakers and famously sipped after he signed the 21st Amendment that ended prohibition. Made with a bar spoon of olive brine, this is ideal with the sea-swept saltiness of a fresh oyster. It really works, shuck it and see.

Instead of an olive or lemon twist, this robust relation of the classic Martini calls on the face-contorting pickled onion as its garnish. This is superb with steak tartare, slicing through the meat and lifting the fatty texture off the palate with ease.

Drinking a Martini at Dukes Hotel in Mayfair is an unforgettable imbibing experience. The hotel bar, whose renowned regulars included Ian Fleming of James Bond fame, has become synonymous with a signature, old-school serve. At Dukes, the martini is brought to the customer on a classic Rosewood drinks trolley. Its preparation harks back to the fifties and was created originally by the legendary Salvatore Calabrese. A huge,
frozen V-shaped Martini glass is thinly coated with very little vermouth and then filled with either freezing cold vodka or, preferably, freezing cold juniper-led London dry gin. There’s no stirring. And certainly no shaking.
Crucial to the classic at Dukes is the Amalfi lemon twist – introduced by Duke’s esteemed head bartender Alessandro Palazzi. A big slice of the large citrus fruit is gently squeezed between finger and thumb

which creates a thin layer of oil atop of the chilled spirit. As the gin becomes more viscous when almost frozen, the citrus oils don’t sink and the temperature also numbs the smell of the spirit – allowing the Amalfi lemon to really come through on the nose. You need large lemons too as there are five shots of alcohol in a Dukes Martini. And they cost £19.50. Hence the house rule that no-one can have more than two.